"CONGRESS HAS a novel response to the rash of prisoners over the past few years who have been exonerated of capital crimes after being tried and convicted: Keep similar cases out of court. Both chambers of the national legislature are quietly moving a particularly ugly piece of legislation designed to gut the legal means by which prisoners prove their innocence.... 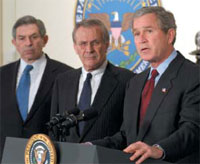 Chris Floyd is an award-winning American journalist, and author of the book, Empire Burlesque: High Crimes and Low Comedy in the Bush Regime. For more than 11 years he wrote the featured political column, Global Eye, for The Moscow Times and the St. Petersburg Times in Russia. He also served as UK correspondent for Truthout.org, and was an editorial writer for three years for The Bergen Record. His work appears regularly CounterPunch, The Baltimore Chronicle and in translation in the Italian paper, Il Manifesto, and has also been published in such venues as The Nation,  the Christian Science Monitor, Columbia Journalism Review, The Ecologist and many others. His articles are also featured regularly on such websites as Information Clearing House, Buzzflash, Bushwatch, LewRockwell.com, Antiwar.com, and many others. His work has been cited in The New York Times, USA Today, the Guardian, the Independent and other major newspapers.

Floyd co-founded the blog Empire Burlesque with webmaster Richard Kastelein, who created the site using open-source software. Floyd is also chief editor of Atlantic Free Press, which was founded and designed by Kastelein.

Floyd has been a writer and editor for more than 25 years, working in the United States, Great Britain and Russia for various newspapers, magazines, the U.S. government and Oxford University. His career began in the hills and valleys of Tennessee and down in the piney swamps of southern Mississippi, covering moonshine raids, shotgun murders, drug-running evangelists, racial conflicts, the economic ravages of the Reagan Administration, and the relentless, turbulent campaign of the Religious Right to gain political power and cultural dominance throughout the "heartland." He returned to his home ground in the late 1990s, where he won awards for his coverage of a deadly hostage shootout and a bloody melee between county officials – swapping charges of corruption and adultery – at a school board meeting.  He also won two awards for column writing during his stints on Tennessee papers.


Floyd spent several years in the depths of the military-industrial complex, working for a security-restricted federal research laboratory on projects dealing with energy conservation, global warming, space travel, transportation, robotics, artificial intelligence and military logistics. On the side, he published fiction and poetry in small journals and taught Russian literature at the University of Tennessee. Later, he annotated Shakespeare, 19th century British poetry and American literature for a start-up company producing multi-media CD editions of literary works for colleges and schools.

In 1994, he made his way to Russia, where he joined the Moscow Times, an English-language daily and one of the first independent newspapers of the post-Soviet period. There he spent two years – the high casino of the tumultuous Yeltsin era – and began writing the "Global Eye" column, which he continued after returning to the United States in 1996. He was also the Times' movie reviewer from 1996 to 2000.

From 1998 to 2000, Floyd was the editor of Science & Spirit, an Oxford quarterly journal dealing with the contentious relationship between science and religion. His work there included interviews with such thinkers as Richard Dawkins, Daniel Dennett, Steven Pinker, Frans de Waal, V.S. Ramachandran and others. He also worked with contributors from around the world – Islamic scientists, Jewish theologians, militant atheists, Nobel Prize-winning physicists, and authors such as Freeman Dyson, Paul Davies, Lisa Jardine, A.N. Wilson, John Polkinghorne and others. Since 2000, Floyd has worked as a freelance journalist and as a writer and researcher for Oxford University.

His story, "Into the Dark: The Pentagon Plan to Foment Terrorism," was chosen as one of Project Censored's "Top 25 Stories of 2002/2003." His pieces have been anthologized in various political collections in the United States.

In 2005, Floyd recorded a CD of his songs, Wheel of Heaven, with producer/musician Nick Kulukundis.

I was in London's Heathrow Airport this morning when the bombs went off in the city, many miles away. Unlike America's CNN-saturated airports, Heathrow has no ubiquitous media presence looming inescapably at every turn. The first inkling we had of the slow-rolling attack was the announcement that the underground service from the airport to the city had been suspended "due to a power failure." Then came snatches of overheard conversations of people on their cell phones: "bus blown apart," "bombs in the tube," "I told them to shut all our pubs and get the hell out of there." No way of finding out more. For once, I longed to see one of those toothsome talking heads blaring out the news to a captive audience.

Soon we were in the car, still under media blackout with a broken radio, driving north on the London Orbital, the great bleak wheel of concrete that encircles the vast metropolis. A line of blaring ambulances passed us on the southern side, heading into the city center. It was almost noon before we were finally able to find out what had happened - or rather, find out the first, still-confused inklings of what had happened. An unknown number of dead; many injured, perhaps hundreds; several tube stations hit, one bus blown up; a coordinated series of attacks, taking place during the course of an hour, and clearly aimed at crippling London's transporation system - which it did, most effectively. There was the usual claim of responsibility by a hitherto-unknown group claiming connection to al Qaeda, although the police were showing an abundance of caution about naming any possible suspects.

Jesus' General does some righteous research on the culturally clashing responses to the London bombing. An excerpt:

"Its time for the President and PM Blair to come to the realisation that its time to save American and British lives and return our troops to their homes.THEN NUKE THE FREAKIN AREA...MAKE IT A PARKING LOT FOR A THOUSAND YEARS! WIPE THE EARTH CLEAN OF THESE COWARDS!"--leagalbgl, Little Green Footballs.

"Those responsible for London attacks are criminals who do not represent Islam or even truly understand (its message)" --Al-Azhar Grand Imam Sheikh Mohammad Sayyed Tantawi, powerful Sunni cleric.

For more condemnation of the attacks from leaders of the "Muslim village" who, according to Tom Friedman, are forever "derelict" in their condemnation of the "death-cult in their midst," see this story. Friedman's gasbaggery is particularly acute in his column on the bombings, by the way, with the usual condescending rhetoric, giant blind spot about the West's part in the cycle of violence, the usual specious logic and of course a subtle plug for his latest book, Flatter Than a Flitter in a Roomful of Elephants, or some such.

On July 1, the former presidential physician of George H.W. Bush wrote a guest column for the Washington Post. Two days later, the attorney general appointed by George W. Bush made a surprise visit to Baghdad. These seemingly unrelated events are not only inextricably linked; together they form a portrait of a nation gone wretchedly astray, hurtling into a moral void from which there may be no return.

There was nothing unusual about the physician, Dr. Burton Lee III, doing a piece for the Post, of course; the paper is the house organ of the American political elite, and a whole troop of loyal Bush Family retainers make regular appearances in its editorial pages, lauding the son who has now ascended the throne. What is remarkable is that Lee came not to praise the younger Bush, but to bury him – with hard truths about the torture regime he has installed in his "terror war" gulag.

Lee, a former military doctor, denounced Bush's use of military medical personnel to help "set the conditions for interrogation": withholding treatment from tortured prisoners, breaking medical confidence to tell interrogators of prisoners' physical and psychological weak spots, and other heinous practices approved by the White House and codified in Pentagon directives for military medical staff.

They seek him here, they seek him there;
Those Bushies seek him everywhere.
Is he in heaven, or Malawi,
That damned elusive al-Zarqawi?

The Zarqawi Phenomenon, by Dahr Jamail, on TomDispatch.

Once more, George Monbiot delivers the goods on the horrific farce of "Live 8" and the "Make Poverty History" movement. Monbiot reveals what almost every single mainstream article about these efforts conceals: that Bush and Blair are "outsourcing" their "benevolent" programs for Africa to some of the most rapacious corporations in the world. They are making a vicious mockery of the generous impulses of millions of young people, marketing themselves as concerned and compassionate leaders while hiding the draconian conditions of near-colonial exploitation they are imposing on any African nation that takes up their offers of aid and debt relief.

I suppose what shocks me most in all of this is the fact that I am still able to be shocked by the shameless, self-serving, murderous lies of political leaders, and the extent to which they are utterly and completely bought and sold by Big Money. Even so, the cynicism displayed in this sickening episode takes my breath away. Once again, I must drag out a line I've used repeatedly in the Bush-Blair era and cry out with a loud voice, saying: "What quadrant of hell is hot enough for such men?"

Here's an excerpt from Monbiot:
Multinational corporations…have already been given control of the primary instrument of US policy towards Africa, the African Growth and Opportunity Act. The act is a fascinating compound of professed philanthropy and raw self-interest. To become eligible for help, African countries must bring about "a market-based economy that protects private property rights", "the elimination of barriers to United States trade and investment" and a conducive environment for US "foreign policy interests". In return they will be allowed "preferential treatment" for some of their products in US markets.