It is nowhere written that the American empire goes on forever.

Why We Fight is a provocative new documentary from 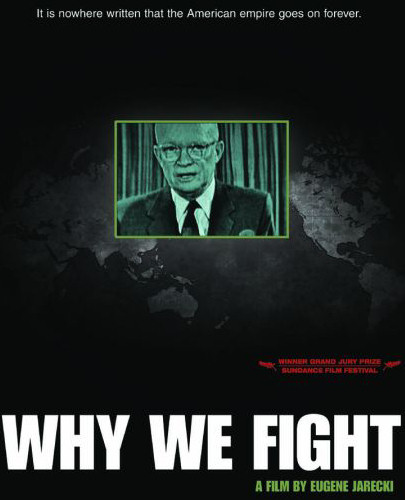 acclaimed filmmaker Eugene Jarecki (The Trials of Henry Kissinger) and winner of the Grand Jury Prize at the 2005 Sundance Film Festival.

Named after the series of short films by legendary director Frank Capra that explored America’s reasons for entering World War II, Why We Fight surveys a half-century of military conflicts, asking how – and answering why – a nation of, by and for the people has become the savings-and-loan of a government system whose survival depends on an Orwellian state of constant war.

Why We Fight features interviews and observations by a "who’s who" of military and Washington insiders including Senator John McCain, Gore Vidal, and Dan Rather. Beginning with President Dwight D. Eisenhower’s prescient 1961 speech warning of the rise of the "military industrial complex," Why We Fight moves far beyond the headlines of various American military operations to the deeper questions of why America seemingly is always at war. What are the forces – political, economic, and ideological – that drive us to clash against an ever-changing enemy? Just why does America fight? Unforgettable, powerful and at times disturbing.

The "military-industrial complex" has long been one of the bogeymen of the left. Not everybody, however, is aware that the term--which seems to describe some futuristic death machinery straight out of "Star Wars"--wasn't coined by George Lucas, Karl Marx, or Noam Chomsky.

No other than Ike Eisenhower, staunch World War II hero and two-time US President, first employed the words in his farewell speech in 1961. Filmmaker Eugene Jarecki uses the blunt warning contained in that now infamous speech to trace the history of the American war machine to the present. His approach is evenhanded and sober, and while the film might actually succeed in winning over undecided minds, "Why We Fight" offers little news for anybody who has been paying a modicum of attention.When Eisenhower warned of the military-industrial complex, he meant a structure that consisted of the military itself, the contractors and plants who produced the weapons, and the politicians who stood to reap the benefits of both. In one strand of his carefully woven tale, Jarecki observes how Eisenhower's prediction has become a reality. Congress, Lockheed Martin, Haliburton and the branches of the military all benefit from increases in defense spending, and, the argument goes, "if all you have is a hammer, everything looks like a nail." A country that spends more than half of its discretionary budget on a gigantic war machine will end up using that machine, one way or another, again and again.The film's title is derived from a series of Frank-Capra-directed World War II propaganda shorts. Jarecki found that when he tried the question on contemporary Americans, the answers weren't as assured as they had been 60 years ago. Why do we fight? Why are we at war with Iraq? "Freedom" is the best answer people could muster, but as it has become increasingly obvious that the Bush Administration lied about its reasons to invade, many of those asked are at a complete loss. Jarecki suggests a simple answer: "Follow the money." According to him, Eisenhower's warning is proof that there has always been a tendency toward metastasizing militarization; the events of September 11, 2001 merely accelerated it. At a time when, as he puts it, the political elites are becoming identical with financial elites, the military-industrial complex now encompasses lobbyists, think tanks and a complicit media that is happy to be "embedded" with the troops instead of attempting to find an independent point of view. The corrupt system that leads to perpetual war, according to Jarecki's thesis, is now so pervasive that it's becoming more or less invisible.To engage that system, Jarecki interviews people from all parts of the machinery: a grandmother who pushes missiles around a factory floor but confesses she would rather work in a toy factory, an optionless youngster signing up for the army, a Vietnamese immigrant who escaped one war and now designs bunkerbusting bombs for another, the fighter pilots who proudly delivered the first strikes in a preemptive war, a Pentagon officer who has become entirely disenchanted with the military, and a retired cop who struggles to reconcile his grief for the son he lost on 9/11 with the realization that he has been duped by the administration's lies. Among the talking heads are Gore Vidal, William Kristol, Richard Perle and John McCain.As well-argued and well-presented Jarecki's case is, it won't seem particularly earth-shattering to anybody who has been able to look at America's military machinery with any sort of objectivity. In this Spring of 2006, with wiretapping scandals, corruption, torture, and a misbegotten war in the center of national attention, it is hard to register too much surprise at any of Jarecki's conclusions. The day's headlines are about all the proof we need to to understand that Eisenhower was right to warn of the "disastrous rise of misplaced power."DVD available here.
back to top
Joomla SEF URLs by Artio